How to capture HTTPS SSL TLS packets with wireshark

This article will explain how to use wireshark to capture TCP/IP packets. Specifically I will show how to capture encrypted (HTTPS) packets and attempt to document the "dance" a client and server do to build an SSL tunnel.

Wireshark is a network protocol analyzer for Windows, OSX, and Linux. It lets you capture and interactively browse the traffic running on a computer network. Similar software includes tcpdump on Linux.

Windows or Mac OSX: search for wireshark and download the binary.

How to capture packets

This is Wireshark's main menu:

A new dialog box should have appeared. Click start on your preferred interface:

You are now capturing packets. The packet information is displayed in the table below the main menu: 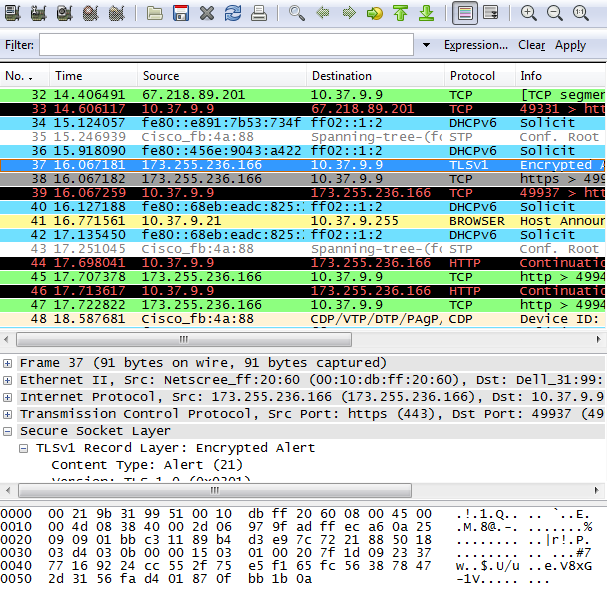 Now browse to an HTTPS website with your browser. I went to https://linkpeek.com and after the page completely loaded, I stopped the Wireshark capture:

Depending on your network, you could have just captured MANY packets. To limit our view to only interesting packets you may apply a filter. Filter the captured packets by ssl and hit Apply:

Now we should be only looking at SSL packets.

2. Each of the SSL records begins with the same three fields (with possibly different values). One of these fields is “content type” and has length of one byte. List all three fields and their lengths.

5. Look to the ServerHello packet. What cipher suite does it choose?
Cipher Suite: TLS_RSA_WITH_AES_128_CBC_SHA (0x002f)
6. Does this record include a nonce? If so, how long is it? What is the purpose of the
client and server nonces in SSL?
Yes, 28 bytes. The ClientHello packet also generated a nonces. They are used to make the session communication between the two nodes unique. It "salts" the communication to prevent replay attacks. A replay attack happens when data from old communications is used to "crack" a current communication.
7.Does this record include a session ID? What is the purpose of the session ID?
Yes, This is to make things efficient, in case the client has any plans of closing the current connection and reconnect in the near future.
8.How many frames does the SSL certificate take to send?
In this case it took 4 frames


Want comments on your site?

Remarkbox — is a free SaaS comment service which embeds into your pages to keep the conversation in the same place as your contentr. It works everywhere, even static HTML sites like this one!

Remarks: How to capture HTTPS SSL TLS packets with wireshark