High load on web server after updating from Ubuntu 10.04 to Ubuntu 12.04 LTS
Check out charts which lineup to when I upgraded:

I couldn't determine the cause of the load average increase...

Update: The issue might be memory bound. Check out this graph that show much higher swap. 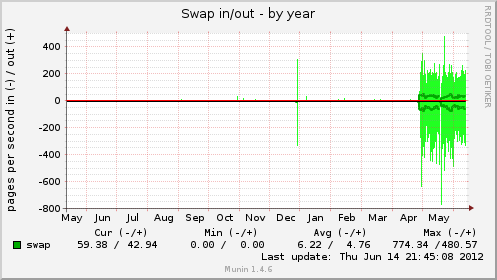 After much research this appears to be a load calculation and display problem with the newer Linux kernels. The community has found Commit-ID: c308b56b5398779cd3da0f62ab26b0453494c3d4 to be the problem. The commit causes incorrect high reported load averages can be reported under conditions of light load and high enter/exit idle frequency conditions (greater then 25 hertz).

A nice fellow named Doug from smythies.com researched the topic between tick and tickless linux kernels and the effect they have on load averages <http://www.smythies.com/~doug/network/load_average/new.html>. You should check it out.

Remarks: High load on web server after updating from Ubuntu 10.04 to Ubuntu 12.04 LTS